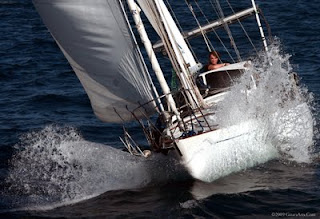 "Go do hard things. If you don't try, it's never going to happen. The majority of people don't even try. You may as well shoot for it with everything you've got, and don't stop when times are tough or it looks impossible. Just keep going. Odds are, something's going to happen."

These words of wisdom were spoken by Zac Sutherland, a record breaker who spent 13 months alone, sailing around the globe (at the age of 17)

On Zac's journey he encountered lack of sleep, rough seas, broken equipment, pirates and more.  At any time he could have quit.  Stopping his trip when he reached many of the ports along his way.  He pressed on.

Before he even left, Zac said "The main obstacle was making everyone take it seriously.  Everyone has an idea for something, but trying to convince people I was going to do this trip [was difficult]".

Can you apply this wisdom to your life?

Being in Network Marketing has similar challenges, the key to success is to keep moving forward and having faith in ourselves!  If you do not take steps to move forward you simply cannot!

So if you are ever feeling you are in a moment of giving up, throwing in the towel and quitting, think of the quote above and "...Just keep going. Odds are something's going to happen"

Alethea Anderson
Keep on, keeping on!
Posted by Unknown at Wednesday, November 04, 2009