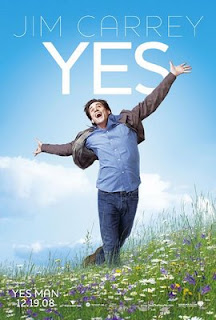 Last night hubby came home with the movie 'Yes Man'. I've been wanting to see this movie as I am a HUGE Jim Carrey fan.

I find most Jim Carrey movies to be hilarious, I remember him from the days of "Fire Marshall Bill" on the TV Show "In Living Color". The man is brilliant!

Rumor has it that Jim Carrey believes in living in the 'NOW', and according to this video, I believe this to be true. I've also heard that in his early career he wrote himself a check, some say 10, some say 20 million. According to this 'legend' this dream came true for him.

Now back to my point, as I got a little side tracked. This movie moved me. Yes I laughed, but I cried. This movie connected with me on a deeper level, and I challenge anyone to say it would not do the same for them.

The basic outline of the movie without spoiling it for those who have not enjoyed it, Carl (played by Jim Carrey) was in a dark place in his life. He shut everyone out, said no to every request, and felt unsuccessful, stuck in a rut, abandoned and alone. 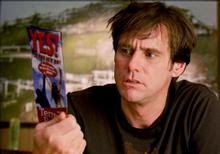 Until one day he runs into an old friend, who was full of life and excitement. This friend showed Carl a brochure that stated in big, bold, red letters "YES!" It was not until later when he hit a rock bottom low that he reached for the brochure, now on his coffee table, and read it.

He then attended the conference that changed his life. This conference awakened something within. Simply by saying 'YES' he allowed so many good things into his life. Formerly dark, dreary and alone; all of a sudden things were aligning at the precise moments and everything just 'worked out'.

Now I wonder, how many of you out there say 'no' when...
Do you always come up with an EXCUSE?
It' is important to remember, often when people ask you something, it is a door of opportunity opening. Each time you say 'no' you are closing the door and will be left only to wonder what might have happened if you had said 'YES!' instead of no...