Captain: Are you ready kids? 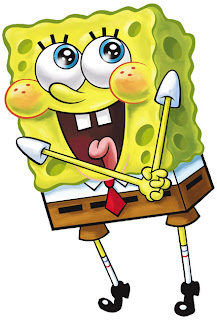 So here it is, how in the heck is this naive yellow fluffy friend so spongefully successful in all of his adventures?

Easy!  Sponge Bob has absolutely no doubt in himself.  He does not question his ability to conqure any challenge. He sets out to do, and he does.  He is known to be silly and perhaps not the smartest sponge under the sea but his absense of worry is his key to success in whatever challenge that is presented.

No matter what it is, be it skill or dumb luck, his persistance pays and he reaches all of his goals.  Makes one think that sometimes there is too much "thinking" going on making the mind fuzzy full of all the 'what ifs' and 'self doubts'.... How about living a day in the NOW, step into your spongy splendidness and do like Sponge Bob!   LA LA LA LA all the way home!

Sponge Bob knows he won't get from Rock Bottom to Bikini Bottom unless he takes all the steps in between... Now you go make like a sponge and DO it!

Alethea Anderson
If nautical nonsense be something you wish...
Posted by Unknown at Monday, January 25, 2010